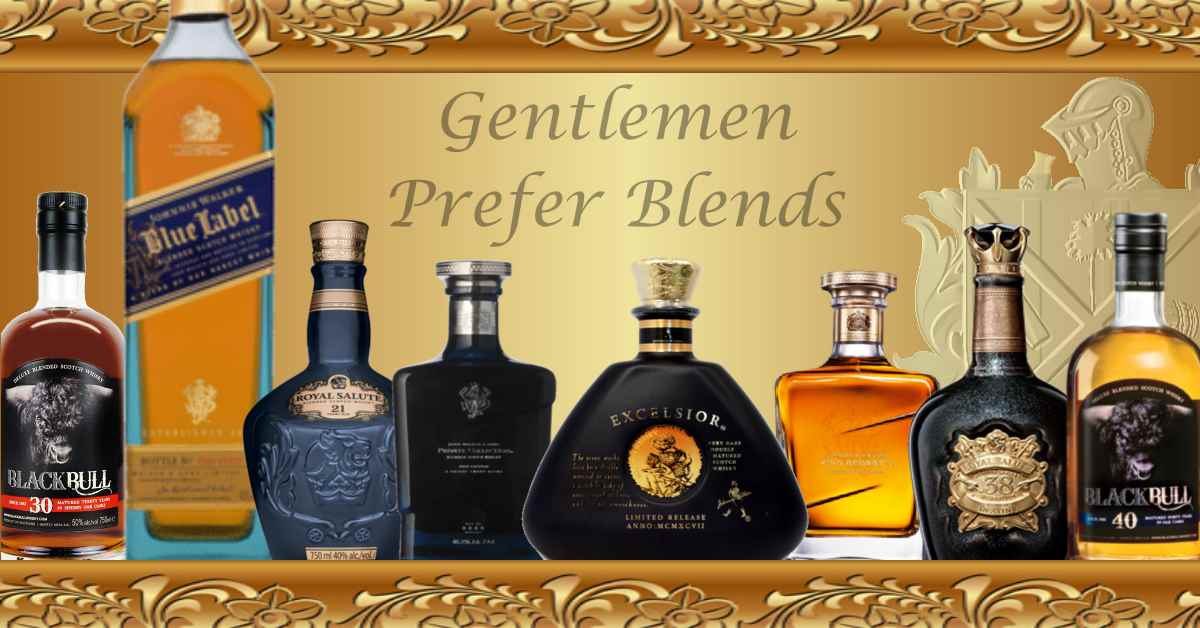 The twits of the upper class are perturbed.  High End blends have traditionally been a mainstay of the shelves of those with more money than sense.  They are the folks that will judge a whisky by the bottle it’s in. The gaudier the better.  They don’t really like drinking scotch, but they like the idea that they like to drink scotch.  Many of these blends are made “smooth”, so as not to disturb the drinker with scotch that may taste too much like scotch.  We, here in the SD Scotch Club scoff at them.  We NEVER buy them.

But you have to admit, you’re curious, aren’t you?

Sure, we’ve seen them in the glass cases at duty free… lurking in crystal splendor above a thousand dollar price tag.  You’d never buy a bottle of course, but you’d like to try a sip, wouldn’t you?  Just for scientific purposes and all that, right?

The SD (Blended) Scotch Club has gone and collected, well, around $5000 of top shelf blended gems from three different brands.  And these are bottles we think may be worth your time.

How could we not?  The reigning whisky sales champ sells millions of bottles to watering holes all over the world, but they also have rare limited editions in packaging fit for a queen with prices also fit for a queen.

Johnnie Walker Private Collection 2014 – Like the Excelsior, this limited edition is no longer made. Master Blender Jim Beveridge handpicked 29 casks from experimental stocks to create this blend.  The 2014 edition was made to emphasize ‘smokiness”.  Approx. value – $850

Johnnie Walker Blue – 1.75L – No good whisky tasting is complete without a little heresy.  Since Johnnie Blue doesn’t quite meet the lofty bar set for this event, we are going to make a cocktail out of it.  Yes, you read that correctly, a Johnnie Blue cocktail with this comically large 1.75L bottle.  Approx. value – $400 (1.75L)

We know Duncan Taylor best from their Dimensions and Battlehill series that lead whisky proselytizer Peter Currie has shared with the LA club.  He’s occasionally slipped in a few tastes of the intro level Black Bull bottles.  We’re going to look at the other end of the lineup however.

Black Bull 30 – One of my favorite blends ever.  This blend is from primarily sherry casks and can go toe-to-toe with almost any malt in the world.  Sadly, it is a relic of the past and you can only find it in auctions now.  Approx. value – $250

Black Bull 40 Batch 1 – This is the original batch that began the Black Bull series ten years ago.  You can spend over a thousand dollars for the newer batches, but you can only find this one with luck or a time machine.  Approx. value – $1200

I love the Chivas Brothers Royal Salute series.  It’s flavorful and pleasant.  It has some of the easiest sippers on the planet and is the baby of Master Blender Colin Scott, perhaps one of the nicest people on the planet.

Royal Salute 21 – While it’s lower pricetag doesn’t quite match that of the rest of the lineup, the whisky does.  Approx. value – $180

Royal Salute Stone of Destiny 38 – Now we’re talking.  This blend prompted me to shake Master Blender Colin Scott’s hand and thank him from the bottom of my heart.  There were no tears, but my eyes did get a little watery.

Dinner is INLCUDED.  Chef Ray will be serving his “high end”  Brunswick Stew which may be worth $100 alone!